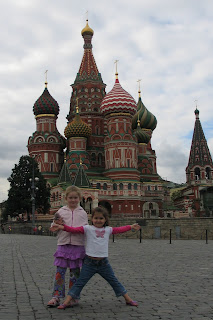 Three years ago today, Katya, Natalia and I arrived in Moscow; Chris had already been here for two months. I remember how daunting everything was... Even though I had spent quite a bit of time in this city before, living here with young children was sooooo different and sooooo hard... Daily existence literally drained me and I cried myself to sleep for months. Life here was so much more expensive than we had anticipated, and our standard of living took a sharp, sharp dip when we first moved from New York. Every day I encountered some sort of difficulty that never would have arisen in the USA, and it was a constant struggle to keep trying. Even now, just thinking back to that first year numbs me.
Instead of driving to Costco and the local grocery store in Brooklyn, I had to push the double stroller in all weather to and from at least three different grocery stores, carrying it up and down a cement passageway beneath the main street--along with all the groceries... Often I couldn't even find what I needed... And when I did, it was hard to even afford it... The grocery store closest to our building wouldn't let me inside with a stroller, but it didn't provide carts. In disbelief, I asked how I was supposed to handle my toddler and carry food--to which the manager replied, "It's not my fault you have two small kids!"
Whenever I did errands further from home, I had to pay high prices for a cab (when you could get one) or hitchhike (not quite as bad as it sounds; everyone here does it since there aren't enough cabs to service the need). When I used public transportation, it usually involved a few transfers and the kids would melt down by the time we headed home. I was stopped a few times by armed policemen who accused me of kidnapping and demanded passports, etc. when Talia (and sometimes Katya) would break down on the bus, crying from stress and exhaustion. "If they're actually your children, then why are they screaming at you so loudly?!!" (Clearly these officers didn't yet have kids of their own--or if they did, they had Grandma nearby to watch them. That meant that they never had to bring their kids with them to do errands...)

Another emotional low point came in January, when after four months of being the only foreigner in her nursery school, Katya cried in despair, "You've ruined my life! I want to throw it out the window!" (Given that we live rather high up from the street, I was scared both figuratively and literally!!) It was very hard for her to adjust to life in a new language, without any of her old friends and the ease of English.
It's hard to grasp how much things have changed in three years! Our kids now speak Russian! To think that the afternoon we arrived, Katya didn't know the language at all... Her first word was спаспиво (spaspivo), which she meant as спасибо (spasibo). Her attempt to say "thank you" came out as "save beer"(rather appropriate for Moscow)! Natalia barely spoke English then--and now she can speak two languages!
The city has also become much more child-friendly and we've figured out how to navigate it. That same grocery store that refused to let me in with a stroller now provides carts with built-in race cars (not that I'd EVER patronize their shop, though). Many restaurants now have "Kids' Brunches" with good entertainment on the weekend. Numerous indoor places to go with kids have opened, helping you to get through the winter. And by now, I've discovered many great places I didn't know existed back then. One of the reasons I started this blog was to try to help some other family just moving here now... How much easier it would have been if someone had given me the list of things to do with kids that I've created on my blog's sidebar...
Adjusting to life here has not been easy, and it was important to me that we celebrate today's significance. I wanted the girls to be very proud of their accomplishments, and to know how proud we are of them, too. I'm also proud of what Chris and I have accomplished; in a few months, we will have lived here longer than we've ever lived anywhere else. We live here, not simply getting by. I'm reading "chick lit" books in Russian for pleasure. I just finished Sophie Kinsella's The Undomesticated Goddess in translation (Богинья на Кухне) and am now halfway through Elena Vesyolaya's Бриллианты Forever, или Кто не носит Tiffani (Diamonds are Forever, or Who Doesn't Wear Tiffany).
It seemed fitting to begin our celebration of today's milestone by a trip to the largest bookstore in town. The children's selection has improved tremendously and we found many great books for Katya--that she can read on her own! Some of them are Russian versions of English favorites: Karma Wilson's Bear Wants More, Bear Stays Up for Christmas, Bear's New Friend, and Bear Snores on and the storybook to the new Disney Pixar movie Ratatouille. 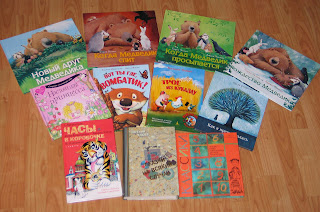 Then we went to see Ratatouille--in English! This was a real treat; usually we have to see all new releases in Russian. We LOVED it. We'd been looking forward to it since last summer when we had seen Cars in English--and there had been a trailer for Ratatouille. (There are a few options for English movies in Moscow, but none is particularly convenient. This one doesn't have toilets in the building, so if your child needs to use the bathroom during the movie, you end up missing about twenty minutes of the film...) 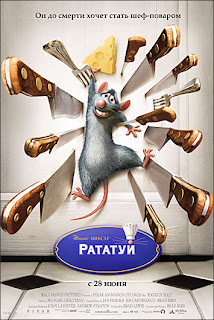 We dropped Chris off at work and I bribed the girls to let me take them to Red Square for an anniversary photo. They did NOT want to go, so I proposed that if they cooperated, I'd take them to the new Evropeisky Mall to play afterward. They quickly agreed and were good sports about posing for the picture above. Unfortunately, two cops hassled me for having stopped where I did, threatening me until they finally agreed to take 500 rubles ($19.45) and go away. The picture was worth the money to me, even if the weather was so overcast that the lighting is too dark... (The blogger in me had an agenda!)

We then headed to the mall. The kids were so good and excited about our celebration that I let them make a cow and a puppy at Build-a-Bear (something I had never let them do before). They cost 400 rubles each ($15.50), so it was a real treat for them at a low-for-Moscow price. They chose red, white and blue dresses for the animals since that's what they had worn the day we moved here. Before they were given their animals' birth certificates, they had to read and recite the pledge below--in Russian. Pretty cool, and a perfect way to celebrate their accomplishments.

We then went to the Princess store, a place the girls always love to visit. The clerk gave them sparkly girly-girl makeovers and they picked out glittery lipglosses. There was NOTHING like this when we first moved here... Little by little, we've witnessed places like this arrive and thrive. We ended our afternoon by playing on the indoor playground inside the mall. The kids are very aware of how recently all of these fun places have opened and they are very appreciative. Me, too; I got to read some more of Vesyolaya's book while they played in the chaperoned Pirates' Labyrinth!

I did NOT want to move here when we did, dreading it for months and months. My friend Mary sent me a book called Who Moved My Cheese? in an effort to help me face the change more positively. The author talked about three-year periods of change, and I really agree... The first year everything is new/hard and you react; the second year you start to figure things out; the third year you actually get to live a "normal" life. This year has still been full of changes due to the kids' health needs, but even so, it has felt so much more normal than the previous two... 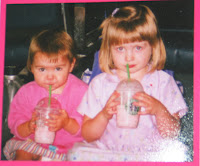 The day we moved, we drank a toast to our new adventure with strawberry Frappuccinos from the Starbucks at the JFK airport terminal. Today we raised a toast to our success with milkshakes and cappuccino. "За наши успехи!" Yes, to our success and to much more... wherever it may be.
Posted by MoscowMom at 9:55 PM

Congrats on 3 years! Your girls will treasure this experience some day. So, do you think you'll still be there in 5 years? That's my long-term family vacation plan: St. Pete's and Moscow in 5 years with the whole family.

As one of the grandparents, I HOPE NOT!!!!

Congratulations to all of you! I can only imagine what you went through in those first few months of living in Moscow. But I'm glad you stuck it out It's a great experience for you and the girls! Way to go!

Oh Tina, I'm sorry. Let me rephrase: Tamara, do you want to go on a vacation together back to Russia in five years?;>

Hi! Is the princess store in the mall that is near the train station by the RadissonSAS hotel? I think it is Europe Square 2? 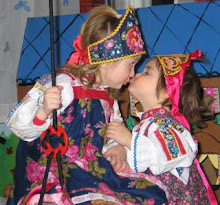 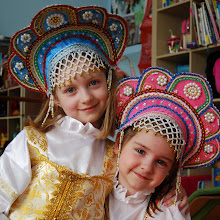